Célia Blauel, Deputy Mayor of Paris for the environment, sustainable development, water, canal policies and the Climate Energy Plan. She graduated from the Institute of Political Studies in Strasbourg in 2003.

She has been an active member of the Green Party since 2006, and in 2008 was elected as a counselor for the 14th arrondissement of Paris, responsible for green spaces and mobile telecommunications. Following the March 2014 municipal elections, she became Deputy Mayor of Paris responsible for the environment, sustainable development, the climate energy plan, water and canals. In this capacity, Célia Blauel has fostered the adoption and implementation of the Plan for the Prevention of Environmental Noise, the Plan for Sustainable Food, the 1,000 Buildings Plan for the thermal renovation of private buildings, and the Paris Strategy for Adaptation to the Impacts of Climate Change. She has also committed to revising the Territorial Climate Energy Plan to define the action of the city in the fight against global warming. She is President of Eau de Paris, a public company that produces and distributes drinking water to Parisians. Since 2014 she has also been the President of Aqua Publica Europea, a European association of public water management operators. Finally, in March 2016 she became Vice-President of the French Water Partnership. With an interest in gender and equality issues, Célia Blauel works to promote advancement in the role of women in leadership, in both politics and business. 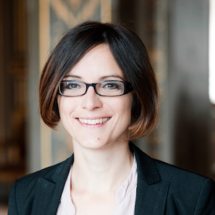