Céline Charveriat is an expert researcher and activist who has been influencing debates, policies and practices in the field of sustainable development and climate change for over 15 years. She began her career in Washington as a researcher at the Peterson Institute and the Inter-American Development Bank. She worked for over 10 years with Oxfam International.

She first represented the NGO at the World Trade Organisation (WTO) and organised its Make Trade Fair campaign, including its landmark advocacy on agricultural export subsidies and domestic agricultural support. In 2011, she became Oxfam's Director of Advocacy and Campaigns, based in Brussels, where her high-level advocacy role focused on EU climate change policy and COP21.

Céline Charveriat is a graduate of Sciences Po Paris, the French Institute of International and Strategic Affairs (University of Paris XIII) and Johns Hopkins University (School of Advanced International Studies). 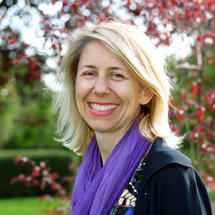 Russia’s war in Ukraine: Why doubling down on the Green Deal is the best strategy