Marie Toussaint, born in 1987 in Lille, is a French environmental activist, a lawyer in international environmental law, co-founder of the association Notre affaire à tous and initiator of the Affair of the Century campaign, elected MEP in May 2019 on the Europe Écologie Les Verts (EELV) list.
At the age of 18, she became involved in politics with EELV and became federal co-secretary of the Young Ecologists in 2011. At the same time, she volunteered for the Yasuní-ITT Initiative, launched by Ecuadorian President Rafael Correa for the preservation of the Yasuni National Park, and then within the global citizen movement End Ecocide on Earth.
In 2015, she left her position as chief of staff to Antoinette Guhl, deputy mayor of Paris in charge of the social and solidarity economy, to found Notre affaire à tous with Julien Bayou and Valérie Cabanes. This NGO, which defends a right to climate justice, is at the origin of the Affair of the Century with Oxfam France, Greenpeace France and the Foundation for Nature and Man.
For the European elections of 2019, she is candidate in fourth position on the joint EELV - AEI - RPS list led by Yannick Jadot and is elected MEP on 26 May 2019.
In June 2020, the book she co-authored with Priscillia Ludosky, Ensemble nous demandons justice, pour en finir avec les violences environnementales (Massot editions), was published, in which they call for the union of struggles for social justice and struggles for environmental justice. 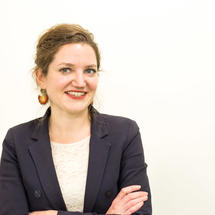