Implementing Paris Agreement-compatible pathways away from coal is feasible in the major coal-using economies within 20 to 30 years, and would be beneficial both from a social and from an economic point of view, according to a new report released today.

The consortium, known as the “Coal Transitions: Research and Dialogue on the Future of Coal”, led by French think tank IDDRI (Institute for Sustainable Development and International Relations) and UK-based research network Climate Strategies, aims to explore pathways for the future of thermal coal.
Coal Transitions has been working with leading research institutes in six major coal-using countries - China, India, South Africa, Australia, Poland and Germany – to evaluate current policies and develop economically feasible and socially just pathways to transition from thermal coal before 2050, in line with the Paris Agreement.

Oliver Sartor, Coordinator for Coal Transitions at IDDRI, said: “the prospective strategies developed by local experts in each of the six countries show that with the right policies, coal could be almost completely phased out of the power sector within the next 20-30 years in all six countries. This could be done without significantly raising power costs for consumers.

“For instance, in India the evidence is that renewable-based mini-grids provide more reliable and cheaper access to electricity for the poor, with spill over benefits for economic development and human health.

“Our analysis concludes that the most likely scenario now is that global thermal coal demand will peak and begin to decline in the early to mid-2020s. This will be driven by the economic rebalancing of the Chinese economy, the growing political importance of air and soil quality and water availability in developing countries, and the mere fact that it’s now cheaper to provide access to electricity through renewables than coal.”

The report cites recent research, for instance, showing that by 2030, 70% of the world’s people lacking access to power could be provided power more cheaply via small-scale renewable energy and battery solutions than via coal- or gas-fired plants

Depending on the country, thermal coal could be replaced by a portfolio of other options, including cleaner
energy, energy efficiency and, in some cases, residual amounts of coal with carbon capture and storage. Both national and local authorities could also explore the possibility of implementing new economic activities basedon innovative sectors.

The Coal Transitions report also identifies how coal workers and their communities could benefit from a fair
transition out of coal and into new industries. Such solutions must be context-specific and agreed between the relevant parties. However, the crucial success factor is to anticipate rather than wait until the economics turns against coal.

Andrzej Błachowicz, Managing Director at Climate Strategies, said: “just transition became such a buzzword, often with little content. Our reports prove that it can work in the limited available time. Just transition can allow for younger eligible workers to be more easily placed into alternative jobs, for older workers to retire naturally, and for tailored worker reconversion and job-transfer programs for workers in the middle of their careers.”

Lola Vallejo, Director of the Climate Program at IDDRI, said: “over 30 governments and more than 50 companies have pledged to phase out coal from the power sector by 2030, under the Powering Past Coal Alliance. While serious coal transition policy dialogues are emerging in developing countries like South Africa and China, countries need to clarify what they are planning to do on phasing down fossil fuels when they next revise the Nationally Determined Contributions to the Paris Agreement in 2020.”

Find the summary report, all six reports concerning China, India, Australia, South Africa, Germany and Poland, and finally the report on the world export market by following this link. 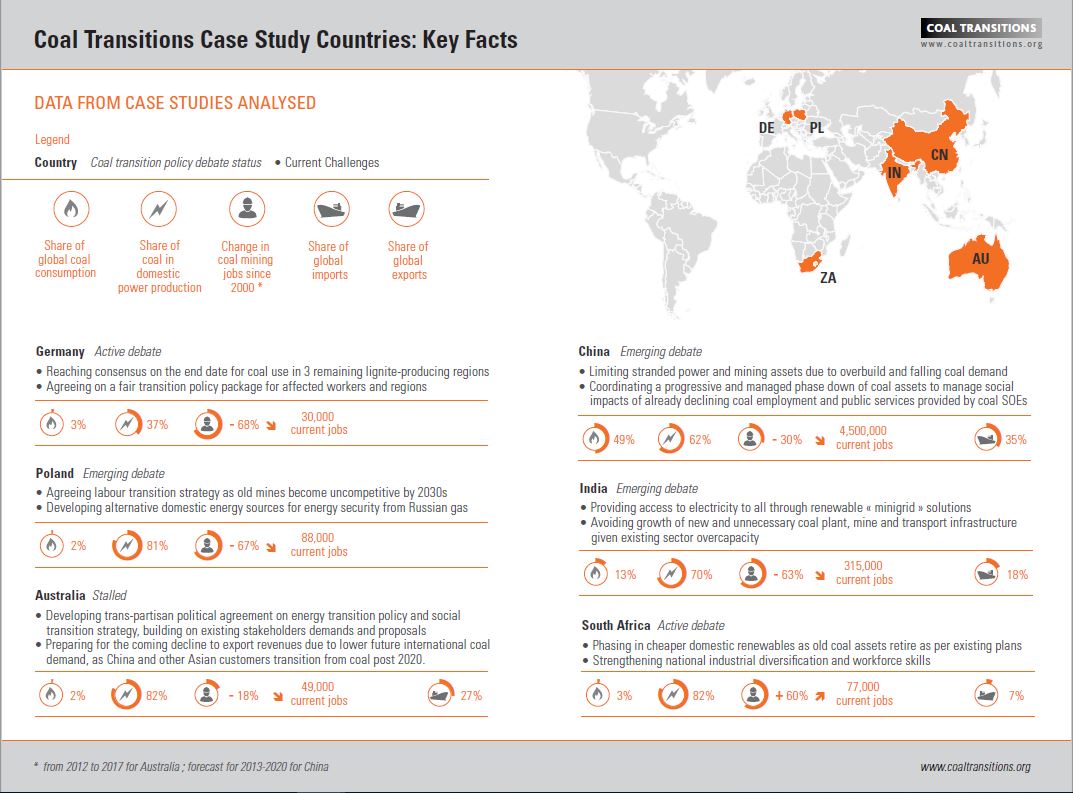