Socio-economic development and sustain- able management of the environment are prerequisites for peace. In this context, the aim of international cooperation must be to renew policies of cooperation by better inte- grating the combined issues of development, social and environmental safety, and security.

In 2017, IDDRI’s research particularly focused on new rationales for Official Development Assistance (ODA), and an assessment of the budgetary efforts required to meet France’s commitments in this regard. In 2015, alongside other countries of the EU, France committed to dedicating 0.7% of its national wealth to ODA, which represents a doubling of the current share of gross national income. French President Emmanuel Macron pledged his commitment during the electoral cam- paign, and following his election, committed to achieving an intermediary target of 0.55% by 2022, the end of his term.

Together with the Global Health Advocates NGO, IDDRI published several papers out- lining potential mechanisms to fund French ODA in view of these goals. Circulated through our networks, and reaching MPs, researchers and ministerial cabinets, these papers made a significant impact on French ministries and the National Assembly. 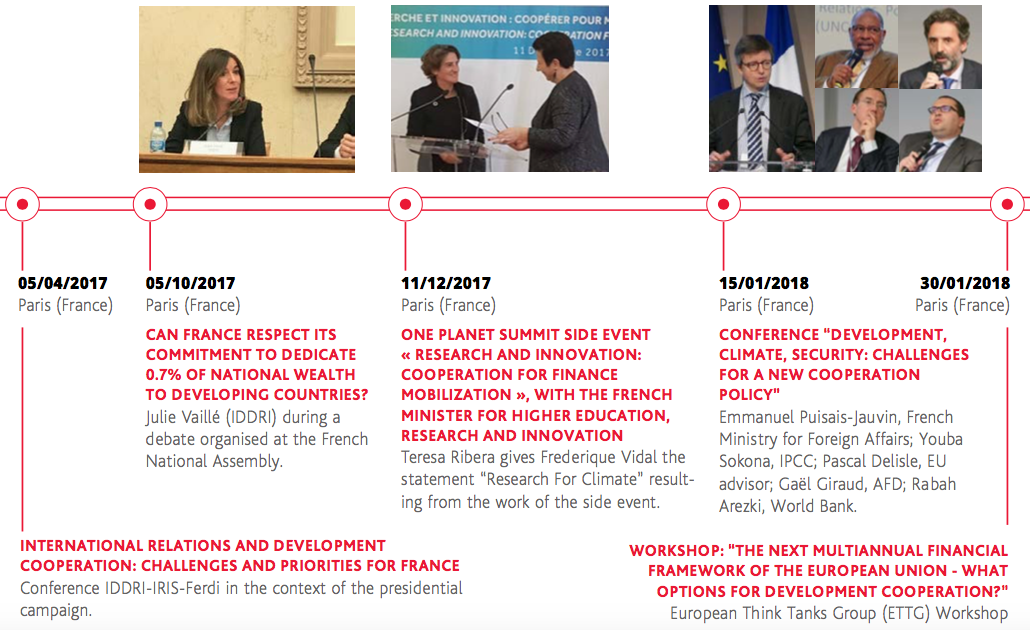 They contributed to bringing ODA back into the presidential discourse, to shaping the se- quence of commitments in autumn, and they sparked invitations to a series of hearings at the French Senate and National Assembly.

Furthermore, IDDRI confirmed its status as representative for French ODA agencies and is now member of the French National Council for Development and International Solidarity (CNDSI).

IDDRI also devoted its efforts towards raising a debate around the various components of cooperation policies within the framework of the “Initiative for Development and Global Governance” (IDGM in French), con- ducted in association with the French think tank FERDI (Foundation for Studies and Research on International Development) over the last decade.

During the French presidential election de- bates, IDGM invited representatives of the five candidates to speak at a public conference held at Sciences Po, entitled “International relations and cooperation for development: challenges and priorities for France”.

A few months later, Teresa Ribera spoke on the subject of sustainable development at the annual seminar of general officers of the ground forces, organised by the French Armed Forces.

During the One Planet Summit held in December 2017, at the invitation of the Ministry for Higher Education, Research and Innovation, IDDRI–with the support of FERDI, CIRAD and French National Research Institute for Development (IRD)–organised a high-level workshop on the role of research and innovation in mobilizing funding for climate change adaptation and mitigation.

A few days prior to the French Interministerial Committee for International Cooperation and Development IDGM organised a full day conference at the French Ministry of Europe and Foreign Affairs, bringing together the best experts and practitioners of cooperation policies around the theme “Development, climate, security: challenges for a new cooperation policy”.

Finally, as a member of the European Think Tanks Group (ETTG), IDDRI has a strong European presence, which has enabled its work to have an impact at the larger European scale during decisive moments of the negotiations on the Multiannual Financial Framework, on the consequences of Brexit for European cooperation, and in the follow-up to the Cotonou Agreement, which expires in 2020.

<<  Back to All the impacts