The Sustainable Development Goals, adopted in September 2015 by all States at the United Nations General Assembly, lay out a set of 17 broad targets to be achieved by 2030 in such diverse spheres as the fight against poverty, education, health and hygiene, protecting our natural resources and international cooperation. The SDGs not only outline a vision of the world we all want to see in the future, but are also drivers of change that can be used by all stakeholders: governments, private com- panies, civil society, local authorities, and funders. They are an instrument that can be used to shape public initiatives, enable companies to analyse and rethink their eco- nomic models, provide associations with a basis for advocacy, and help mobilize all actors. For this vision to become a reality, all these actors must be familiar with and appropriate the SDGs.

Since 2016, IDDRI has been working towards raising awareness around the SDGs and the opportunities they present, first among public policy-makers and then among com- panies and civil society, in France and across Europe, through a number of publications and conferences. IDDRI team members have also participated in several events, especially at the French Senate and the National Assembly, thus becoming a rec- ognized actor in France on the SDG agenda. IDDRI was part of the French delegation at the High Level Political Forum held in New York in July 2017 for the follow-up and review of the implementation of SDGs worldwide.

In addition, IDDRI has worked with the IEEP and the multi-stakeholder alliance Europe Ambition 2030 to raise awareness around the SDGs at the European level, notably at a high-level conference organised in Rome in March 2017 to mark the 60th anniversary of the European Union. 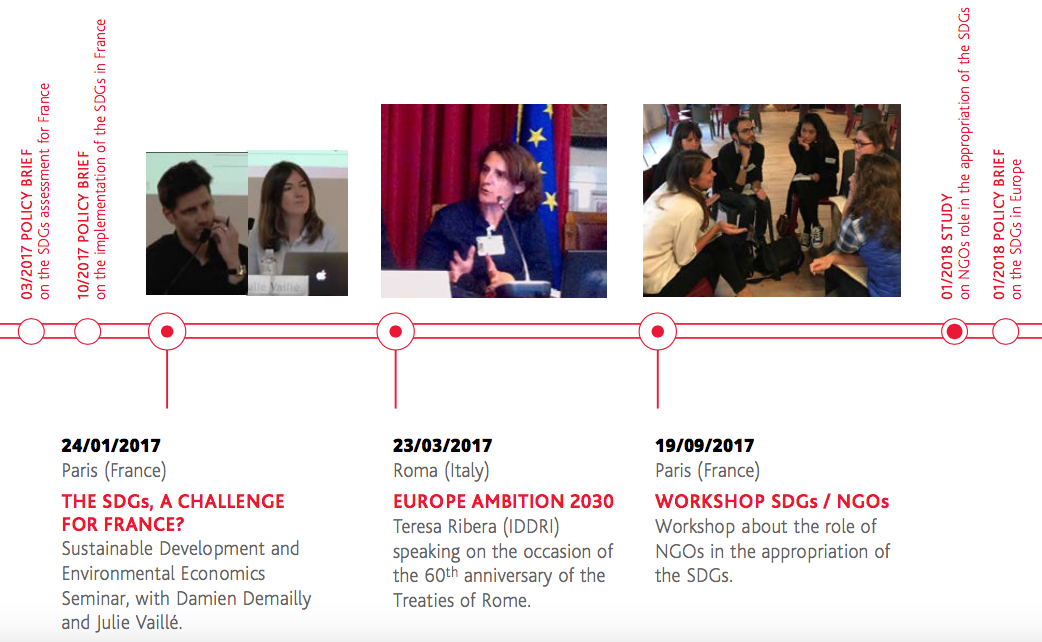 All these efforts have contributed to the emergence of a French and European policy agenda around the SDGs. In France, the government has officially launched the development of an SDG roadmap, whose main priorities are based on several ideas put forth by IDDRI, such as the inclusion of SDGs in the budget process and in impact assessments of future laws, or even the need for high-level leadership.

The EU is also beginning to move forward on the issue: a European Commission Reflection Paper on the SDGs is now expected for 2018. IDDRI has already begun developing and publishing its ideas for this paper.

2017 has thus been a transition year for SDGs.

<< Back to All the impacts