Sunita Narain has worked at the Centre for Science and Environment (CSE), a research and advocacy centre based in New Delhi, since 1982. She is currently Executive Director of the Centre, Treasurer of the Society for Environmental Communications and Editor of the bi-monthly magazine Down To Earth.
She is a writer and environmentalist who uses knowledge for change. In 2005, she was awarded the Padma Shri by the Indian government. She has also received the World Water Prize for her work on rainwater harvesting and for her political influence in developing paradigms for community water management. In 2005, she also chaired the Tiger Task Force, at the request of the Prime Minister, to develop a conservation action plan for the country after the loss of the tigers in Sariska. Sunita Narain was a member of the Prime Minister's Council on Climate Change as well as the National Ganga River Basin Authority.
Sunita Narain began her work in the early 1980s as a co-researcher with Anil Agarwal, a prominent and committed environmentalist who gave the country its environmental concern and message. In 1985, she co-edited the State of India's Environment Report, which helped the country understand why India is so important to the poor. In 1989, learning from people's successful initiatives to manage their environment, she and Anil Agarwal wrote 'Towards Green Villages', which advocates local participatory democracy as a key to sustainable development. In 2012, she wrote the 7th State of India's Environment Report, 'Excreta Matters', which provides a comprehensive analysis of water and pollution problems in Indian cities. 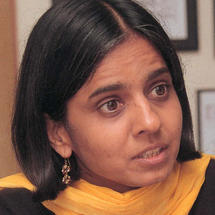