Sandra Bessudo is the Assessor to the Vice President of Colombia for the oceans, and the Founder and Director of the Fundación Malpelo y otros Ecosistemas Marinos.

In this role she carried out the management plan for the island of Malpelo (Colombia), which has had protected area status since 1995, was recognized as a “particularly sensitive area” by the International Maritime Organization (IMO) and is a UNESCO World Heritage Site.

Sandra Bessudo is recognized for her commitment to ocean conservation. She has led numerous scientific expeditions and research projects. In January 2012, she was appointed Executive Director of the Colombian Presidential Agency of International Cooperation (APC-Colombia), and in 2013 President of the Colombian Commission of the Ocean and Representative of the Colombian Government to the International Whaling Commission (CBI). Sandra Bessudo was also High Advisor for Environmental Policy, Biodiversity, Water and Climate Change to the President of Colombia, Juan Manuel Santos Calderón.

She has a degree in Marine Biology from the École Pratique des Hautes Etudes (EPHE), and a Master’s degree in Life and Earth Sciences from Perpignan (France); she is also a professional diver (with over 7,000 dives). 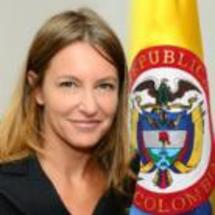