The starting point for the Audacities Project, coordinated by IDDRI and FING, was that digital technology has indeed entered our cities, but not in the way that the smart-city scenario would have it—i.e., through a vision that is steered, centralised and under control. The “real” digital city is being deployed without a master plan and largely through a kind of hi-jacking or “uberisation” (Google, Amazon, Waze, Uber, AirB&B, Twitter, CityMapper, etc.). These destabilising elements pose questions of governance and innovation that IDDRI and FING explore through five case studies.

One of these studies is analysed here and deals with the democratisation of the different sensors and digital tools for geo-tracking and data collection, which gives new measuring power (air quality measures, mapping) to a wide range of actors, including citizens: this is what we call “crowdsourced measurement”. However, measurements and statistics hold power stakes and their production links up with a political intention, which thus raises questions of governance or, in other words, how this “new power” is managed. What are its implications? What does it produce? Greater citizen awareness, advocacy tools, a change in how a phenomenon is represented, a situation of dependence on a new actor…?

To answer such questions, this analysis, headed by IDDRI and FING (Next-Generation Internet Foundation), identifies what is changing, what is reshuffling the cards and shaking up the players traditionally active in these areas, and what is actually re-distributing empowerment to measure and produce data.

From traditional actors to the new entrants: a new configuration?

Be it for measuring air quality or crowdsourced mapping, governance basically rests on the historical actors in place, be they public actors or multi-stakeholder governance structures that include public actors. The job of measuring air quality is mainly carried out by authorised associations (AASQA) and whose mission includes monitoring and forecasting air quality, informing citizens and public authorities and assessing public policies. For the production of mapping data, the National Institute for Geographic and Forest Information (IGN) is one of the major long-standing actors tasked with ensuring the production, maintenance and diffusion of “geographic reference data” in France.

Since the mid-2000s, these actors have seen the advent of new players and new tools. Their arrival has caused some upheaval mostly in the activity of mapping, emblemised by Google, who rocked the sector’s boat by making professional tools available to all as early as 2005. Their tool has become the most widely used standard both by individuals and by many institutions or local authorities (for data searches, visualisation or referencing). In 2006, an open-licence citizen alternative appeared on the scene, OpenStreetMap (OSM), which has subsequently developed into a large-scale collaborative project that reached the milestone of one million contributors in 2013. 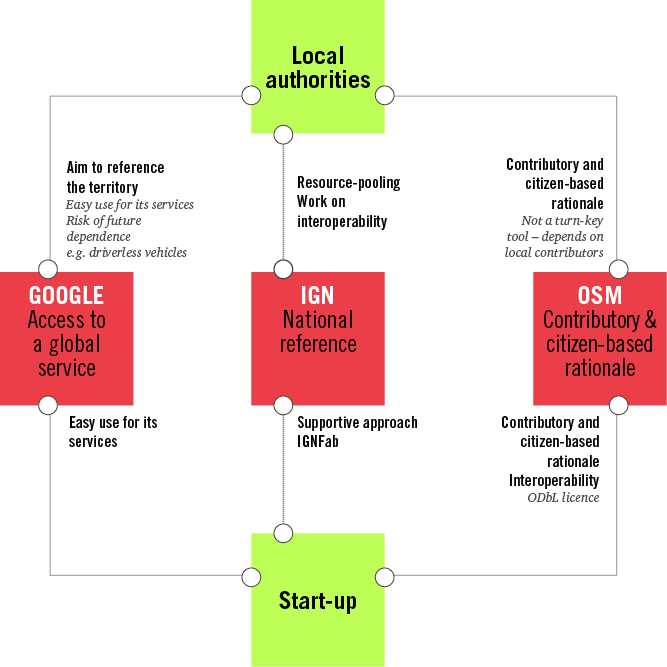 When it comes to measuring air quality, the emergence of new players is both recent and more discreet; there has been intense innovation, associating new micro-sensors, indoor air purifiers and digital technology. Start-ups such as Ambiciti or Plume propose personal apps that give users daily indicators of the pollution level in their city and provide additional information on the question of pollution. Plume will soon be commercialising an individual clean-air tracker (portable for use when travelling or indoors) to give users information on their exposure to pollution in any situation. These innovations are helping to reshape representations and awareness-raising approaches. The movement is recent and, for the time being, no Google-sized operator has cornered the market (but Google could soon enter into play with its Sidewalk Labs). On the other hand, distributed sensing is beginning to make headway, be it through initiatives run by citizens (e.g. https://citoyenscapteurs.net/) or, more rarely, by local authorities, as is the case in Rennes (the Ambassad’Air project, today run by the Maison de la consommation et de l’environnement). 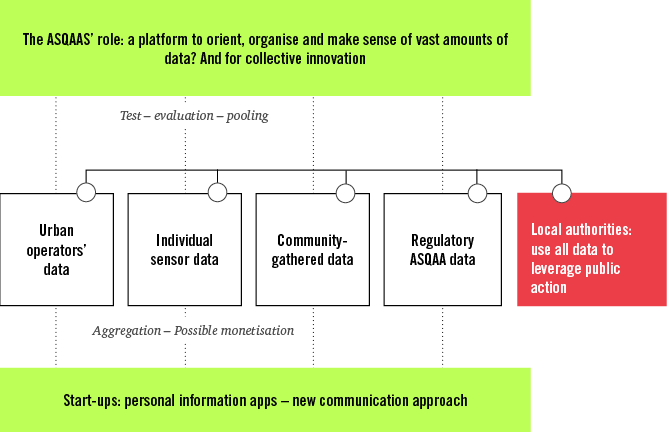 In both cases, crowdsourced and citizen measurement operates in parallel to the “traditional” data measuring or producing systems and rarely interacts with them. This is largely because their measurements have different end goals: for example, IGN aims for quality and coverage of the entire French territory, whereas OSM aims to provide data for precise hyperlocal usage, user ownership and awareness-raising. Technical reasons also weigh in: how can contributors’ data be taken into account and integrated, and what procedures need to be set up? So do cultural reasons: debates and tensions around the expert/amateur divide still exist!

How are historical actors managing the arrival of new entrants?

To what extent is this “disruption” now shaking up their activity? On this count, the two cases studied differ slightly: in one case, Google (and OSM to a lesser degree) has led IGN to move forward and launch its publicly available Géoportail in 2006. The portal promotes IGN’s digital databases, which cover all French territory, facilitates access and makes searches more user-friendly. Since 2014, IGN has also created IGNFab to stimulate and support re-use of its data by service providers and encourage start-ups to use their geographic services rather than Google’s highly attractive user-friendly ones. And a first case of substantial collaboration between IGN, the French Post Office and OSM (and Etalab) has seen the light of day with the project BANO (open national address database). In a nutshell, the historical actor has been driven to innovate in order to adapt to the new landscape.   In the case of air quality measurement, the actors have also begun to move—more recently and with regional disparities though.

Even though the impact of start-ups operating in the crowdsourcing measurement business, such as Plume, is very modest for the time being, their anticipated arrival was enough to spur some providers into thinking that they needed to take the changing context on board. Yet, often, the links between these start-ups and the historical actors are actually very tenuous. The former are developing a different approach from the latter, as they aim to talk about air pollution differently and propose actionable ways of limiting a user’s exposure to pollutants. The differences in methods and objectives, as well as questions about reliability, continue to inspire a degree of mistrust from the historical actors and sometimes lead to controversy (cf. Article in French).

One example of current outreach is ATMO in the Auvergnes-Rhônes-Alpes region. ATMO has decided to launch the Mobicit’air project to test micro-sensors and their reliability, understand the issues of crowdsourced measurement and possibly enhance the data from their fixed-sensor networks. AirParif has proposed another way forward with its 2017 launch of Airlab, illustrating the need for a structure able to promote the sector’s economic growth by facilitating experimentation and the emergence of solutions to improve air quality in a multi-stakeholder context. In fact, crowdsourced measurement has the potential to open up large markets, as air quality data, and mapping data even more so, form the bedrock for a host of services—and offer fertile ground to first movers!

What lessons can be gleaned from these changes?

In both of the cases studied, there is a redeployment—admittedly in its early stages—of the historical actors eager to extend their conventional role of “distributors of reference data” to include new dimensions, notably by becoming “platforms”. With this new abundance of data, the diversity of sources needs to be orchestrated with the diversity of needs, taking into account end goals. Citizen measurements may not need the same data as the professional actors using modelling, for example. But there is also the need to make sense of this heterogeneous mass of data, both at a scientific level (what do the discrepancies between sensors imply?) and a political level (what messaging is targeted at a situation in a given territory?) The traditional actors (IGN, ASQAA, etc.) could thus move towards a role of monitoring, expertise or assembling. At this stage, these are only signals and possible ways forward revealed by some advanced cases, but they do resonate with broader observations made by the Audacities project on the changing face of city governance.

As for local authorities, whose role and evolution form the core of Audacities’ analysis, how are they positioned on the subject? Or what would they have to gain?

Of course, air quality is now a real cause for concern—but not yet for action—for local authorities (mainly big cities, but also roads subject to heavy traffic such as the Arves valley in the Haute-Savoie region). On this count, there are real opportunities for crowdsourced measurement and collaboration with new actors. A key factor being the possibility of raising the awareness of citizens, who can then be collectively mobilised, for example, on sustainable urban development projects. It is also an opportunity to anticipate the rise of connected personal health topics (new services, new challenges for environmental health policies). Finally gaining control of the subject can also help to counter the risk linked to the proliferation of sensors and captured data—namely the risk of creating masses of pollution-related data that are discrepant for the same geography, and thus the risk of illegible or erroneous information. When it comes to producing geo-spatial data, the reasons for action are slightly different as this involves not only avoiding a dependence on a major player like Google (both in terms of data and the production of services), but also taking advantage of contributory tools like OSM to enrich data on a given territory (or ensuring more regular updates), notably in sustainable development projects (e.g. cyling infrastructure).   In the field of crowdsourced measurement, the destabilisation caused by digital technology is synonymous with both risks and opportunities for public actors. To make the most of this transformation, they need to be able to redeploy, form new alliances and develop new skills, all of which are subjects explored by the Audacities project.