This year at COP25, the Warsaw International Mechanism (WIM) for loss and damage will be reviewed. It was established at COP19 to address the negative effects associated with climate change on human and natural systems, including extreme weather (hurricanes, heatwaves) and slow onset events (sea-level rise, desertification). Effects include loss of biodiversity, land, food and water systems as well as forced population displacements. With mitigation behind track and limitations of adaptation, loss and damage is a priority issue in climate policy negotiations for most vulnerable countries (Least Developed Countries (LDCs) and Small Island States (SIDS)). Loss and damage refers to the impacts beyond risk reduction and preparedness measures, calling for climate action now to address and minimise these effects.

What is loss and damage and why does it matter?

Loss and damage refers to the adverse impacts of anthropogenic climate change on human and natural systems. These effects occur due to insufficient and inadequate adaptation and disaster risk reduction, maladaptation, and unavoidable impacts. They are also referred to as residual effects, those that occur despite preparedness and risk reduction measures. The academic literature provides empirical evidence of loss and damage beyond adaptation, as in highly exposed zones on small islands, where physical constraints hinder alternative options (Duvat & Magnan, 2019).

The scope of loss and damage effects is wide-ranging, covering economic and non-economic (material, immaterial) impacts and including different time scales (slow and sudden onset events). Most vulnerable countries are particularly vulnerable to adverse effects: for instance, Nepal has been facing loss and damage from landslides triggered by torrential rainfall (van der Geest & Schindler, 2016); and extreme weather in the Caribbean has led to the forced displacement of several communities across small islands (Thomas & Benjamin, 2019).

Loss and damage under the UNFCCC

Loss and damage under the United Nations Framework Convention on Climate Change has been pushed forward by Parties most vulnerable to these climate change related impacts (e.g. Alliance of Small Island States (ASOSIS), LDCs). Progress has been made since first initiatives to promote loss and damage when the UNFCCC was drafted in 1991, with first formalised action at COP13 in 2007 and the establishment of the Warsaw International Mechanism (WIM) for loss and damage and the constituted body (Executive Committee) at COP19 in 2013 (see timeline below, produced by he UNFCCC). 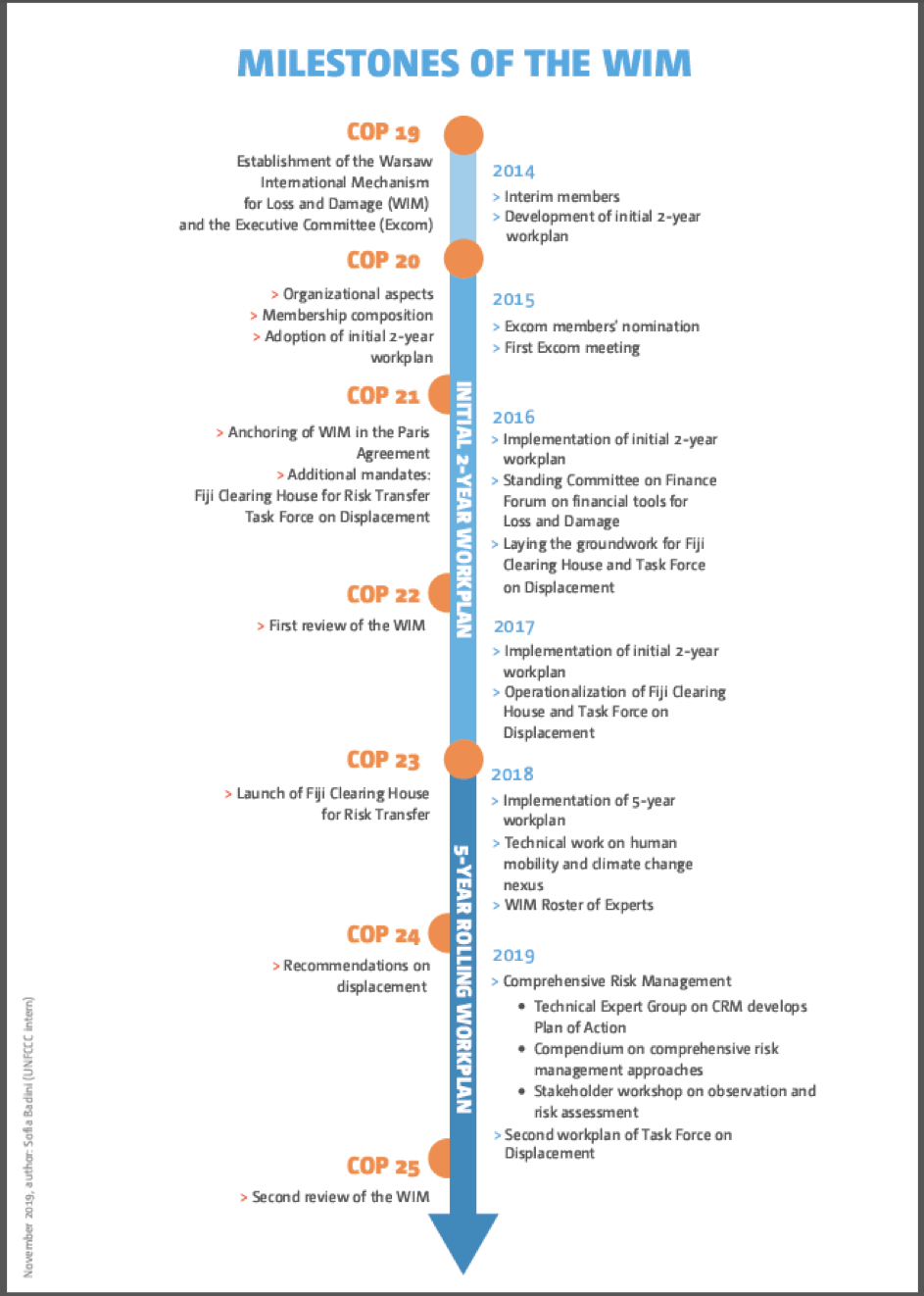 The aim of the WIM is to address loss and damage associated with impacts of climate change, including extreme events and slow onset events in countries most vulnerable to these climate change impacts. Within this framework, the WIM has three main functions: (1) Enhance knowledge and understanding of comprehensive risk management approaches; (2) Strengthen dialogue and coordination across stakeholders; (3) Enhance action and support through finance, technology and capacity building. The Executive Committee (ExCom) is the constituted body implementing the mandate of the WIM. As part of the rolling five-year work plan, there are thematic working groups on: Slow Onset Events, Non-Economic Losses, Human Mobility (Task Force on Displacement) and Comprehensive Risk Management Approaches (CRM). The ExCom and working groups develop scientific understanding of loss and damage and draw from country experiences to highlight areas for urgent action. Much of the work to date amount to technical reports on evidence of loss and damage, technologies to assess and prepare for risks and on financing instruments.

Loss and damage under the Paris Agreement

The Paris Climate Agreement (adopted at COP21 in 2015) includes an article (Art. 8) specifically on loss and damage. This was an important achievement for most vulnerable countries by underlining loss and damage as a third pillar of international climate policy negotiations next to adaptation and mitigation. The implementation of the Paris Agreement also brought new governance elements and processes with the transparency framework and the Global Stocktake. The establishment of the WIM and Article 8 point to steps forward towards bringing local loss and damage effects to political climate negotiations. Residual impacts of loss and damage from climate change occurring now and projected in the future call for action and support promoted under the UNFCCC to mobilise innovative tools (financial and policy responses) to meet the urgent needs of vulnerable countries.