The transport sector is responsible for nearly a quarter of total energy-related CO2 emis- sions. Building on the pioneering expertise of the Deep Decarbonization Pathways Project (DDPP), IDDRI and its partners have devel- oped a dedicated project (DDPP-Transport) and toolkit for public and private actors in the transport sector to engage in dialogue and identify low-carbon development sce- narios at the national level.

The first phase was developed and applied by the four teams of the DDPP network in France, Japan, Mexico and the United Kingdom. Based on an analysis of the determinants of transformations in the transport sector, such as demographics, economic development, urbanisation, and their respective impacts, the methodology allowed the representation of the evolution of the sector to 2050 using 27 key common indicators for all countries.

These results were presented by each of the teams in their respective countries in targeted meetings, at conferences and within country-level processes aimed at building low-carbon transport strategies. In France, for instance, we presented our findings to the concerned ministries and public agencies, and also participated in the National Councils on Mobility (Assises de la mobilité) and review workshops of the transport part of the National Low Carbon Strategy (SNBC-Transport). 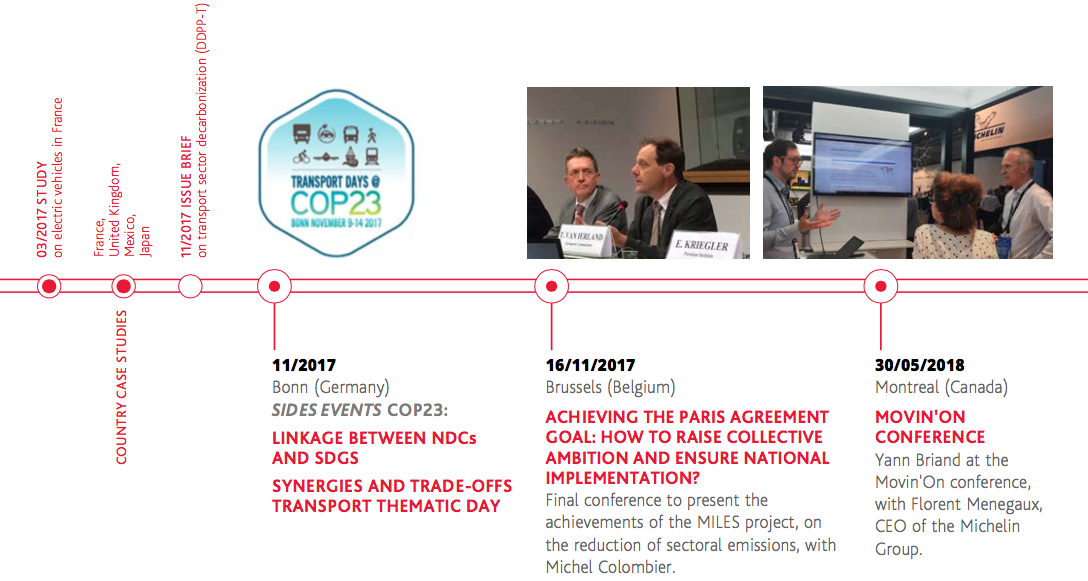 Beyond contributing to domestic debates, these analyses can serve to inform the 2018 Facilitative Dialogue at COP24 and the preparation of more ambitious future NDCs by 2020. As Michel Colombier explained during a presentation to the European Commission: “Beyond simply revisiting their emissions targets, countries should identify sectoral transformations for deeper cuts.”

A national contribution based on the explanation of existing or planned sectoral transformations and policies is clearly a more credible con- tribution than a simple global emission reduction target.

To take this methodology and message to the international debate, and beyond the four countries analysed, IDDRI partic- ipated in a number of major events: the International Transport Forum in Leipzig in May 2017, Movin'On in Montréal in June, and COP23 in Bonn in November.

At these events, IDDRI made it a point to communicate a single, clear message by associating the DDPP-T with other major transport initiatives such as the Paris Process on Mobility and Climate (PPMC), the International Transport Forum of the OECD (ITF) and the Science Based Targets Initiative (SBT). These four entities presented their ini- tiatives jointly at the COP23 Transport Days and will continue to do so in 2018.

<< Back to All the key impacts