COP25 held in Madrid under the presidency of Chilean Environment Minister Carolina Schmidt had a more limited scope for technical discussions than in Katowice (Poland) last year, and aimed to send a clear signal to raise the climate ambition in 2020. In the end, it achieves a very mixed result on these two points, due in particular to the increasing polarisation of the positions of major emitting countries, despite the leadership shown by vulnerable countries and the European Union. The British in charge of next year's key Glasgow summit must immediately draw the necessary lessons and engage in intense climate diplomacy, including local authorities and companies, towards these blocking countries or the major attentive emerging countries.

The results obtained at COP25 are unanimously considered very disappointing by observers—and even the UN Secretary General himself. Overhanging with its catchphrase on "the time to act", and despite the unprecedented presence of citizen mobilisations on the doorstep and within the headquarters of the COP, this UN summit appears to be disconnected from the requests for action expressed.

The Chilean Presidency's commendable intention was to be up to this mobilisation, but also to the messages contained in the three IPCC special reports (1.5°C, Ocean and Cryosphere, Land Use) of the last twelve months, or the latest particularly strong report of the United Nations Environment Programme (Emissions Gap Report 2019) on the "lost decade" of climate action. All these signals contribute to a clear call for all countries to raise the ambition of their nationally determined contributions (NDCs) next year. Nevertheless, according to one of the "constructive ambiguities" of the Paris Agreement, signatories are called upon to submit increasingly ambitious NDCs aligned with their maximum ambition, but those whose current NDC runs until 2030 can "communicate or update it" following a literal reading of paragraph 24 of decision 1/CP.21.

Adopted under the Chile Madrid Time for Action, decisions 1/CP.25 and 1/CMA.2 fail to make this clear, universal and time-bound call (2020), due to the combined action of many blocking countries on climate action (such as Brazil, Australia, the United States and Saudi Arabia), but also to the wait-and-see attitude of decisive countries. In particular, the BASIC countries, clearly driven by Brazil and China, used the—real—inadequacy of efforts on pre-2020 commitments as an argument to dilute the message on ambition, following a false dichotomy of "ambition versus implementation". However, for a discerning observer, the text on ambition is embedded in decisions, and science is mentioned several times, albeit timidly, as an essential transmission channel for this enhancement. Nevertheless, the diplomatic action of the Spanish Minister of the Environment (and former Director of IDDRI) Teresa Ribera, who managed to save a text that looked much weaker in the last hours of the summit, is to be welcomed, while the absence of many ministers from so-called "ambitious" countries was noted.
On the technical side, COP25 failed to define three points on which it was expected to focus: the rules for the implementation of international voluntary carbon markets governed by Article 6 of the Paris Agreement, those governing the reporting of country efforts (see transparency mechanisms) and the alignment of the timeframe of these commitments (common timeframes for NDCs). Avoiding rules that allow double counting of emissions reductions, or that would lead to the same "hot air" problem as in the Kyoto Protocol, was a prerequisite for countries that signed the San Jose Principles to preserve the environmental integrity of carbon markets, at the initiative of Costa Rica, which opposed Brazil and Australia, isolated in their positions. The adoption of clear rules is expected by the private sector, first and foremost the CORSIA mechanism for international aviation. All these points are formally postponed until next year due to lack of consensus, in accordance with the rules of procedure.

In addition, some consultations on Article 6 excluded some countries from the final sprint, in defiance of the transparency and inclusiveness that underpin the legitimacy of the UN process.

Is the ghost of Copenhagen hovering over Madrid? In itself, the very fact that the COP could take place is a logistical feat and demonstrates the resilience of the process. The Chile Madrid Time for Action decision makes it possible to save the process in a very difficult context, the texts have advanced on many points, and technical assistance and expertise solutions have been provided to avoid loss and damage related to climate change. In addition, in line with the Beijing call on biodiversity and climate, the decision adopted in Madrid enshrines the need to address climate change mitigation and adaptation in an integrated manner with biodiversity preservation, a theme promoted by IDDRI in the run-up to COP25. In addition, two dialogues are announced in June 2020 on "ocean" and "land use", which will aim to guide domestic action in countries. But the devil is (still) in the details: the major agricultural countries (Brazil and Argentina in the lead) have managed to limit the climate and land issue to a question of adaptation to impacts in the context of these dialogues.

With only eleven months to go until COP26, attention is now turning to the British, who have formally been given the presidency, and have renewed their commitment to making it a success following the recent election of Conservative Boris Johnson. Brexit or not, the European Union will be a key partner: the adoption of the carbon neutrality objective in 2050 and the communication on the Commission's Green Deal have firmly placed the Union in the ranks of the coalition for ambition alongside vulnerable small islands. These announcements, which were beneficial for the general dynamics, nevertheless came too late to give a real political impetus. Clarifying the content of the future European NDC as soon as possible is necessary to commit China to enter the game on climate ambition; the EU seems to be the only actor able to do so, while the United States coming back into the Paris Agreement is uncertain.
China and the EU have a particular responsibility on climate and biodiversity issues, and will have to be on the same line during the Petersberg Dialogue (April) and the Leipzig Summit (September) ahead of the international deadlines of Kunming (COP15 of the Convention on Biological Diversity) and Glasgow (COP26). But betting only on a China-EU tandem, trying to replicate the Sino-American "G2" of 2014, is too risky. This COP having revealed fragmented power relations, COP26 should be based on a strategy of distributed leadership, based on intense official and informal diplomacy. 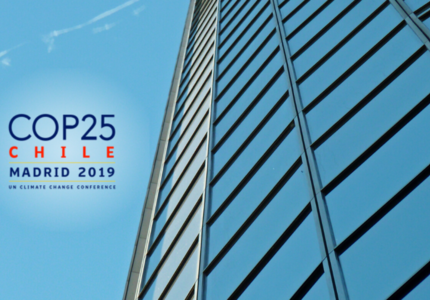 COP25 needs to shape the increase in collective ambition