On Wednesday, November 30, the European Commission published its much anticipated “Winter Package”—a major set of legislative proposals and new policy initiatives on climate and energy. The purpose is to put in place the policies and measures that the EU needs to deliver on its climate and energy targets for 2030 and beyond. The proposed measures would be a significant step towards achieving the EU’s medium-term goals, but they are not yet ambitious enough to put the EU on a path to its long-term decarbonization objectives. The Winter Package represents a major part of the European Commission’s attempt to “operationalise” its energy and climate objectives laid out in its Strategy for an Energy Union in 2015, including its climate mitigation target presented as its contribution to last year’s Paris Agreement to reduce its greenhouse gas emissions by -40% by 2030 and -80% by 2050.

What does the Winter Package propose?

The package includes detailed legislative proposals in four key areas: energy efficiency; renewable energy; electricity market design; and governance of EU climate policy. On energy efficiency, the EU would set itself a target to reduce its energy consumption by 30% by 2030 compared to a (relatively generous) historical baseline, by essentially prolonging energy savings obligations schemes, strengthening funding and incentives for building retrofits, and continuing effective policies on eco-labelling and product design. On renewables, Member States are required to contribute to an EU-wide goal of 27% renewable energy as a share of final energy consumption by 2030 and would have some flexibility on how to achieve this. To help meet this goal, the EU also proposes to set an obligation on suppliers for heating and cooling to increase the share of renewables in their sales by 1% per year, new fuel blending mandates for transport fuel suppliers, as well as new finance and rules to strengthen investment. On electricity market rules, changes are proposed to accommodate much higher shares of renewables in the grid, e.g. by increasing the flexibility of the system, unlocking potentials for consumers to participate in the power market and fostering a common approach to ensuring security of supply between Member States through new regional cooperation initiatives. On governance, measures aim at introducing greater coherence of Member States’ national climate and energy policies and to streamline their reporting obligations, by requiring them to develop National Climate and Energy Plans out to 2030 that integrate all dimensions of the EU’s Energy Union strategy.[1] These will have to be coherent with new national long-term low emissions strategies that extend out to mid-century. There will also be a new annual “high-level” progress monitoring process.

Is the content of the Winter Package fit for purpose?

The proposals in the Winter Package are a step in the right direction. The measures proposed would go a long way to help the EU meet its 2030 climate and energy objectives and some would also start to put in place underlying structural changes to the energy system that are needed to achieve deeper 2050 emissions cuts. If adopted in a strong form, the package would signal internationally that the EU has a reasonably credible set of policies backing up its commitments under the Paris Agreement. The Commission has also intelligently proposed that performance revision dates for national plans and directives be aligned with the 5-yearly “ambition cycles” of the Paris Agreement. Ambition could therefore be increased over time. Beyond climate, the Commission should also be credited for putting a strong focus on making the energy system benefit consumers, local communities and innovative businesses. The EU is often stereotyped as being dominated by elites with little concern for the priorities of ordinary citizens. Yet, many of the measures proposed would do a lot to empower ordinary consumers to reduce their energy bills, promote decentralized energy solutions for households and local communities and help reduce energy poverty. However, the package does have some important weaknesses. Firstly, the measures proposed are almost certainly inconsistent with the kind of sectoral transformations that the EU needs to pursue to achieve its 2050 emissions goal. For instance, if adopted, the -30% energy savings and 27% renewables targets would only ensure a modest improvement upon current trends in the EU. However, as IDDRI has argued recently, current trends are still far from adequate to put the EU on a pathway to its long-term climate goals. For instance, the 27% objective for 2030 actually implies a slowdown of the deployment rate from the prior decade. The risk is that much faster rates of deployment will be required in the following decades just to meet the EU’s -80% target in 2050, let alone going beyond it (see Figure 1). Figure 1. Proposed renewable deployment levels to 2030 are not in line with past trends or the -80% target in 2050 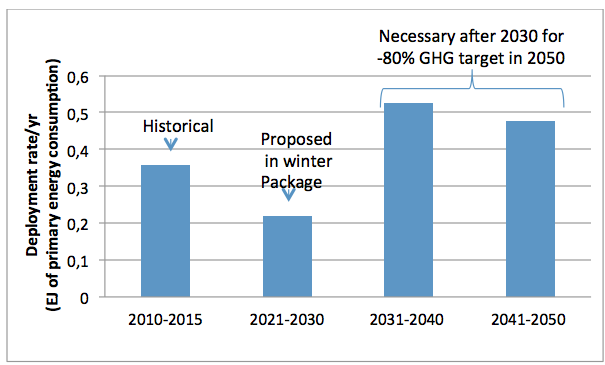 Source: IDDRI, based on data from MILES (2016). It will therefore be crucial that the new governance mechanism highlights these inconsistencies, that Member States are incentivised to go beyond the EU’s minimum requirements, and that the revision cycles embedded in the legislation allow for these weaknesses to be addressed. The Commission’s strategy also tries to strike a delicate balance between the responsibilities of the EU and of Member States and it is not yet clear how this will play out in practice. On the one hand, the Commission is clearly trying to give Member States more say in the way they implement their national energy transitions (e.g. the national plans), partly so that they will take ownership of the EU’s climate and energy goals. On the other hand, the EU is still trying to set up a raft of sector-specific targets, mandates and measures, EU-binding targets, gap filler mechanisms if EU targets are missed, etc., so that it does not lose all control over the process. This is not necessarily an unhealthy tension, but it may mean that the right balance between EU-level and Member State ownership is not easily found. Finally, some of the Commission’s proposals sometimes lack the precision that is required for effective execution. For instance, the Commission rightly wants Member States to do long-term decarbonization strategies to mid-century. The point of such strategies is to inform short-term measures that need to be taken today to enable deep targets to be met in future decades. However, strangely, these long-term strategies are only required to be finalised in 2020. This would fall 2 years after the due date for the draft National Climate and Energy Plans (which set strategies to 2030) in 2018.

The proposals outlined by the Winter Package will now be debated, re-negotiated, and amended over the coming year or two before their final adoption. This will occur via the EU’s so-called “co-decision” process, which will involve the EU Parliament and the Member States who sit in the EU Council. A lot can still change and, in the current political climate, this negotiation promises to be difficult. Ideally, the proposals will be amended and adopted in their strongest possible form. One way of looking at the Winter Package is that it is basically the necessary minimum that the Commission thinks it can ask of its Member States to accept to be held to by Brussels at this time. However, nothing prevents individual Member States to go further than the minimum EU requirements, or for the EU to revise this minimum level of ambition in line with the revision cycles of the Paris Agreement. The Winter Package should therefore be read as setting a floor on the ambitions of EU climate and energy policy, not a ceiling. [1] The 5 dimensions are: decarbonization, energy efficiency, energy security, internal energy market (gas and electricity), and innovation and competitiveness. 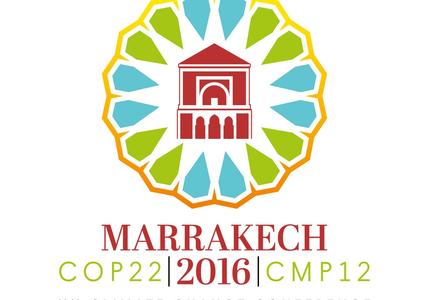