In this second part of a series of three blog posts1, we continue the analysis of our relationship with consumption by examining more specifically the popular beliefs criticised by Frank Trentmann in his book Empire of Things (2016). 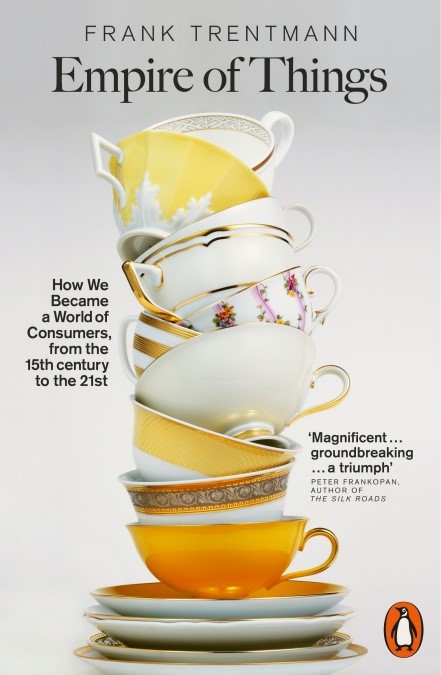 Consumption has a harmful effect on society by increasing the pace of life.

The environmental criticism levelled at consumption is often coupled with criticism of its adverse impact on society and lifestyles. F. Trentmann looks at two recurrent criticisms of consumption as a factor in the devitalisation of society.

The first criticism argues that we are intoxicated by advertising and consumption, meaning we always want more and are willing to work more to get it, to the detriment of our pace of life. According to F. Trentmann, the statistics show on the contrary that for the last century, people have been working less and have more leisure time, in particular due to regulations on working time. According to the second criticism, summed up by the image of the “kid in the candy store”, activities that take time and skill are replaced by the consumption of a mountain of objects that offer more instant gratification. F. Trentmann shows that the reality is not so simple: first, leisure activities that require patiently acquired skills have not disappeared; second, consumers continue to forge sustained connections to some of the objects they purchase. Consumers are not passive, they are also creators through consumption; for example, smartphones can be seen as an amplifier of leisure and socialisation.

How then can we explain the existence of these criticisms and the feelings of stress, of work as a constraint, and the persistent sense of acceleration that they encompass? Hartmut Rosa2 analyses these paradoxes and identifies other mechanisms at work, which are not to do withrelated to consumption. In his view, this feeling stems from a process combining the acceleration of technical change, the acceleration of practice changes underway within society (e.g. work, family) and the acceleration of the pace of life. For example, much greater capacities for travel and communication (email) increase our personal and professional pace of life; leisure activities among the most highly educated have become more varied, more intense and subject to greater productivity, thereby imitating work, which is itself modified by management practices involving greater flexibility, frequent job changes, restructuring, etc. H. Rosa believes the source of this phenomenon lies in the fundamental principles of the modern era: the desire for innovation and the needs of capitalism, the principle of competition and the weakening of institutions that provide security and stability; and the pursuit of emancipation and personal fulfilment. This means the possibility of returning to a nostalgic vision of “slow”3 life, an idea associated in some schools of thought with the environmental project, or at least ensuring a slowdown enabling us to better protect the planet, is a major challenge.

Is consumption the expression of our freedom or the transformation of citizens into passive consumers?

F. Trentmann shows that this question, which contrasts two very different political visions, is poorly formulated, since consumption is neither a natural expression of humanity nor an external constraint imposed upon it. On another level, research shows that marketing, the “sword arm” of consumption, should not be seen as all-powerful or nor should consumers be seen as totally passive (Desjeux, 2013; Marion, 2011)4. Consumption is a complex social phenomenon, with a long history; numerous institutions have influenced its different forms and, in return, consumption has transformed social relations, powers and values.

Does the state have legitimacy to act on consumption patterns?

F. Trentmann demonstrates the extent to which large swathes of our consumption have been influenced, organised and developed outside the scope of markets and individual consumers. The period of industrial paternalism, when company towns provided for all the needs of employees, is a striking illustration of this. The same is true of the role played by the state in diets. In the United States, for example, after the Second World War, the state needed to dispose of its agricultural surplus; it thus developed the idea of a decent meal for all children, as a public service provided at school, and thereby directly affected millions of children. Nixon’s arrival in power in 1969 put an end to this scheme: the measure was transformed into aid for only the poorest, before being privatised; there was then a shift away from the idea of a healthy meal, and fruit and vegetables were gradually replaced by products that were higher in fat and sugar, thereby preparing generations of consumers for these dietary practices. According to F. Trentmann, this is just one illustration among many, and the state cannot therefore say “its hands are tied because of the sovereign consumer”, since it has a high capacity to act on and influence consumption patterns, and together with a collective historical responsibility.

Is moving away from consumption realistic? And if not, what should be done?

We project things onto consumption, we condemn its impact, and we take a moral stance: this is as old as civilisation itself. We thus too often forget its history and the diversity of its connections with society, but also the fact that objects are part of what makes us human. “Things are not just things”, says T. Jackson, as “material objects enable us to participate more easily in the life of society”5. Giving up objects is not so easy, since emotions, identities and things are all linked6.

We are nevertheless capable of acting on consumption patterns, and the state has a role to play in redefining its the place of consumption. Indeed, F. Trentmann notes the promise of prosperity existing within our societies: “by one route or the other, all modern regimes ended up promising more goods to their subjects”. This is a crucial lesson for conducting the ecological transition, showing in particular that it is legitimate and useful to open the debate within society on our lifestyles and consumption patterns. To move beyond simple criticism, F. Trentmann outlines a vision: consumption can be reinvented, it is not immutable in form, but it undoubtedly calls for changes to the promise central to our blueprint for society. We will examine this promise of prosperity in the third and final part of this series of three blog posts.