The second week of the UN Climate COP26 in Glasgow will open with a day dedicated to Adaptation and Loss and Damage, with discussions likely to center on the operationalisation of the Global Goal on Adaptation and modalities for reviewing the overall progress made under the Global Stocktake (GST). In 2022, Parties will start a first phase of information collection and preparation for the GST, however important technical, methodological and policy challenges on adaptation could hamper collective efforts. IDDRI’s GAP-Track approach aims to harness these various challenges by moving away from a nationally-oriented assessment by building on the identification of Representative Adaptation Challenges considered as proxies of global priorities. The GAP-Track 2021 report presents first results of a pilot study and explores next steps for a global application that could provide complementary information on adaptation progress and needs, and support the GST cycles.

How to measure adaptation: a scientific and political challenge

The most recently submitted Nationally Determined Contributions (NDCs) are not consistent with a 1.5 °C world1, putting adaptation in the limelight. Increasing ground-rooted works however show how societal adaptation has the potential to substantially limit climate risks in the future, notwithstanding inevitable residual risks (e.g. loss and damage).

Figure 1. The potential for societal adaptation to reduce climate risk by the end of this century (inspired from Magnan et al. 2021)2 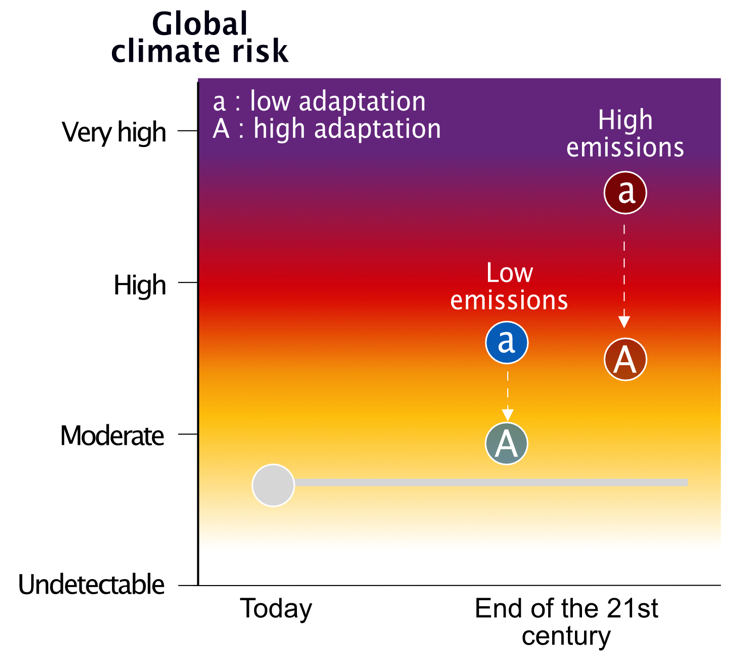 But how do we know whether or not we are on track towards achieving adaptation progress globally? This question will be addressed at COP26, with key discussions on the 2023 Global Stocktake (GST) for assessing progress on achieving the Global Goal on Adaptation (Paris Agreement) and the relevant modalities for assessment.

For some Parties to the UNFCCC, including highly vulnerable countries, the GST could help identify the magnitude of needs, including for loss and damage. As insufficient climate finance and the failure towards meeting the 100 billion USD-a-year commitment by 2020 (Copenhagen COP15 2009) have rallied civil society and several countries to call for enhanced adaptation action and finance, the UK has pressured all countries to submit Adaptation Communications for COP26 to provide information on adaptation activities underway and planned. The Adaptation Research Alliance launched at COP26 is an example of new coalitions (North-South, South-South, public-private); Adaptation Without Borders (AWB) showcases opportunities for international and regional cooperation on adaptation, especially to address cascading climate risks across borders.

However, ideas are scarce on how to evaluate progress towards the Global Goal on Adaptation (enhancing adaptive capacity, strengthening resilience and reducing vulnerability to climate change risks) and more specifically, how to inform the GST. South Africa presented a vision of targets (increasing the climate resilience of the global population by 50% by 2030 and by at least 90% by 20503), yet it is not clear how to achieve them, especially given both methodological challenges and the different national conditions of climate vulnerability and exposure

Tracking adaptation presents well-known methodological challenges, such as the overall lack of structured information on climate risk levels and adaptation policies and actions (and evidence on their effects on current and future risk reduction)4. In addition, aggregating local- and national-level information into a global perspective while assuring that context specificities are not lost is a complex issue.

Several initiatives have been developed over the recent years to inform adaptation progress tracking.5 The UNFCCC Adaptation Committee’s recent technical paper provides a comprehensive review of approaches to evaluating adaptation progress at different scales.6 In addition, supplemental guidance on reporting processes7 have started to be considered in the revision of Adaptation Communications and will be finalized in the second half of 2022, which could present a form of tracking instruments for countries in the lead up to the GST. However zooming in on the text of the Paris Agreement gives rise to some frictions on interpretation of progress in relation to adequacy and effectiveness of adaptation. This is one component of a much larger contention on how to capture the full dimensions of adaptation (i.e. conceptual-technical challenge).

It is therefore increasingly recognized that multiple approaches are needed to ensure an inclusive process and that the GST should be flexible (learning by doing) in terms of the types of information to be considered8. The GAP-Track builds on that to complement the landscape of global adaptation progress tracking.

The GAP-Track project initiated by IDDRI uses an expert judgement approach applied to a question matrix, a scoring system and Representative Adaptation Challenges here defined as proxies of adaptation priorities at the global level (see Methodological report). Adaptation is framed by a question matrix—with 6 overarching questions and 19 sub-questions (see Figure 2) that aim to gather targeted information on specific issues on adaptation progress. Experts are asked to provide a score (0-4) for each question, with each score associated with specific criteria that should be informed by in-depth justifications. The GAP-Track framing and methodological protocol allows flexibility to mobilize different expertise and bring in different sources of information and data, thereby overcoming challenges where data might not be available or are of different types (e.g. quantitative metrics, grey literature, research experience on the ground, traditional knowledge, policy documents). In that way, the GAP-Track develops an additional information pool on adaptation progress that could be complementary to existing approaches. 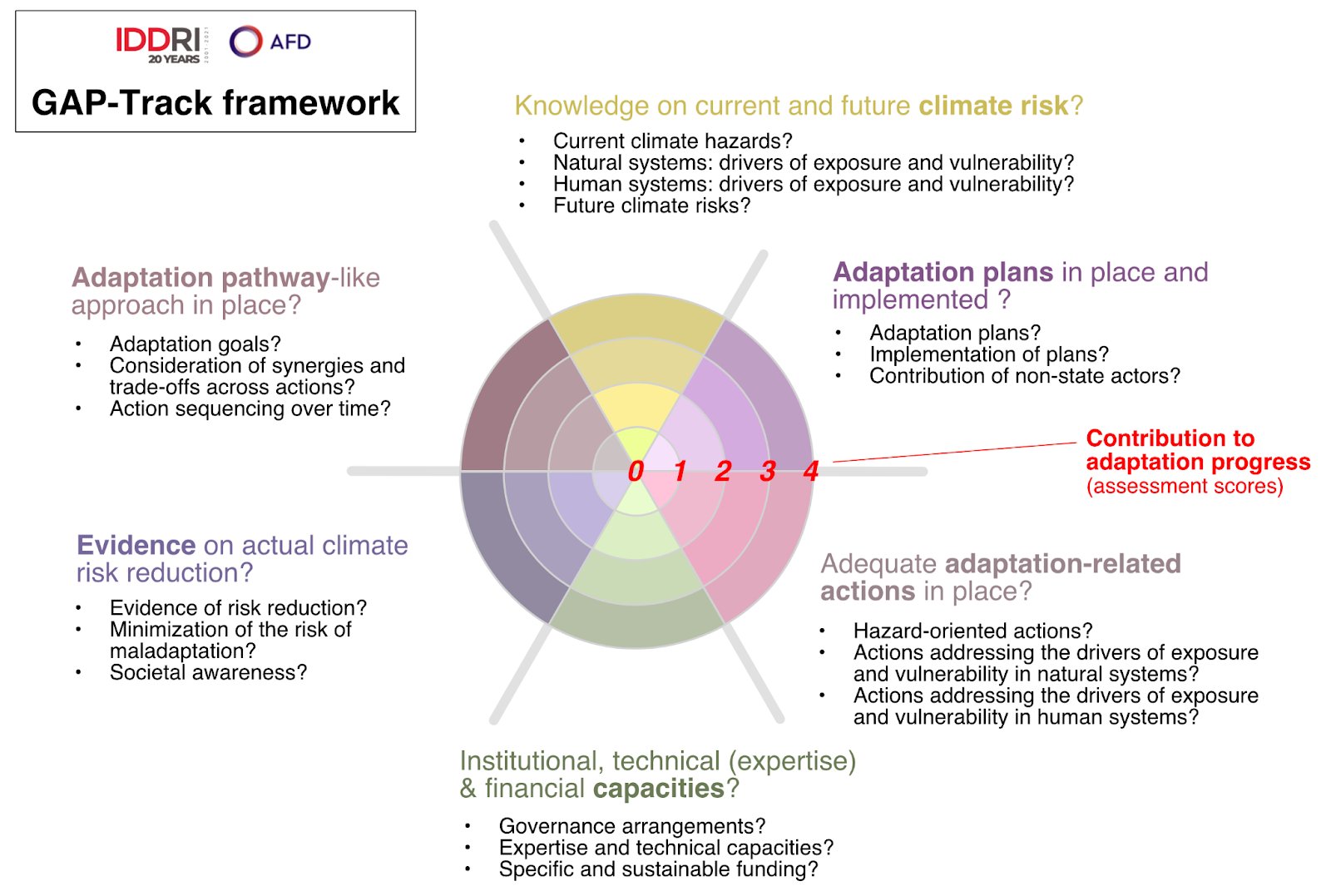 A pilot study in 2021 applied the GAP-Track approach to one Representative Adaptation Challenge (coastal adaptation) and two national-level case studies (Mauritius in the South West Indian Ocean, and Senegal in West Africa). Lessons learnt from this first application offers opportunities to expand on an upscaled approach for a global perspective. The GAP-Track Final Report discusses some proposals and an architecture for this global application, and calls for addressing three key questions at the science-policy interface.

How to organize an assessment for adaptation at a global level? The GAP-Track recommends to focus on Representative Adaptation Challenges, which brings to question how to identify these? The aim would be to identify global adaptation challenges that can be identified across scales and national circumstances such as for coastal systems, urban systems, water and food security, peace and mobility, etc. Some scientific works, including from the IPCC on representative key risks (in AR5 and the upcoming AR6) could help identify Representative Adaptation Challenges, which would require additional policy discussions to ensure fair representation and selection.

Moving away from a national framing to a global perspective: towards setting global priorities. The GAP-Track pilot phase focused on two national-level cases to rapidly test the approach and mobilize expert groups in a limited time. However, applying an assessment to 196 countries and for several Representative Adaptation Challenges would not be feasible in the lead up to the GST in 2023. Instead, it could be valuable to adopt a different entry point, for example, by large regions, critical sectors, or socio-geographical systems (coasts, cities, arid regions, etc.). An evaluation by country or large regions risks confronting political tensions on financing adaptation in addition that some countries might be underrepresented. At the same time, the sectoral approach has been extensively looked into (see Global Center on Adaptation; 2020 report). Here we argue that the socio-geographical approach could offer opportunities to go beyond territorial issues and bring a diversity of national circumstances together around a series of cross-scale adaptation challenges: coastal, urban, etc.

Operationalizing a global-scale GAP-Track: who will take the lead? An application of the GAP-Track at a global level would entail mobilizing a multi-partner coalition and worldwide experts to address the full scope of Representative Adaptation Challenges, whatever the scope for analysis decided on (large regions, socio-geographical systems, etc.). The aim is to ensure the preparation of results—even partial—ahead of the GST in 2023, and full results for the next cycle in 2028. This calls for discussions between the scientific and policy communities to identify ways forward for operationalizing a global-scale GAP-Track.

Mitigation ambition in motion: how closer to the 1.5°C goal after COP26?